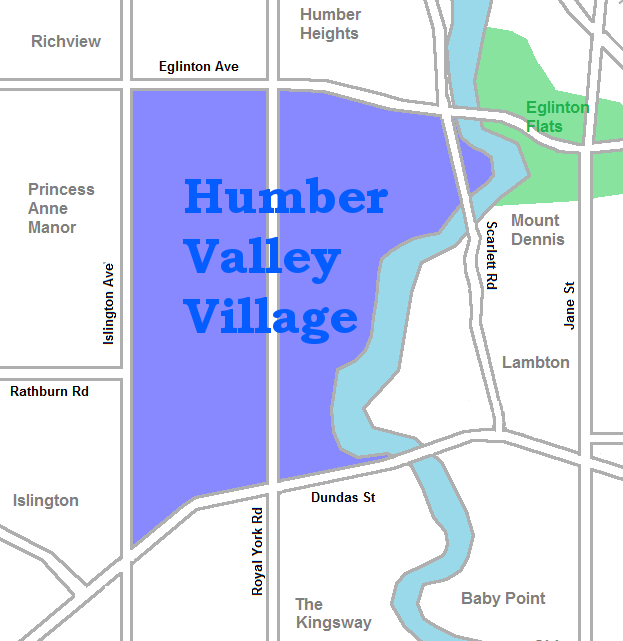 This neighbourhood is the wealthiest part of Etobicoke, and considered at par with the exclusive neighbourhoods that developed along Avenue Rd, and Yonge St, between Bloor and Highway 401. This wealth is evident in the schools. Catchment areas for schools such as Lambton-Kingsway, Humber Valley Village, Our Lady of Sorrows Elementary School, Etobicoke Collegiate Institute, and Richview Collegiate Institute are very defined. In some cases, those who do not live in the boundaries must apply with a lottery system to gain acceptance. There is also an independent elementary school, Kingsway College School, in the area, located on Dundas St.

Located in the neighbourhood, James Garden is a botanical gardenmanaged by Toronto Parks, Forestry and Recreation Division.

The defining element of this community would be the parks system. Not only are there five golf courses within one kilometre of every side of the borders, but huge networks of green space surround the Humber River. This connects to the Martin Goodman Trail, which follows Lake Ontario. Lambton Woods Park is located south of the city-owned Scarlet Woods Golf Course (c. 1974)[5] along the western banks of the Humber.[6] James Gardens is a botanical garden located north of Lambton Woods Park, and is managed by Toronto Parks, Forestry and Recreation Division.

The Toronto District School Board, the city’s public school board, operates one elementary school in the neighbourhood, Humber Valley Village Junior Middle School. Located on Hartfield Road, west of Royal York Road, north of Dundas Street, the property lies within the valley of the Humber River. It was established in 1951.

In addition to public schools, the neighbourhood is also home to a number of private schools, Kingsley Primary School,[8] Kingsway College School, and Leonardo da Vinci Academy. Leonardo di Vinci Academy is based at the former location for Buttonwood Hills Public School, and leases the property from Toronto Lands.